The development of robotics systems has changed the daily practice of neurological rehabilitation since the 1990s. Modern gait robotics systems support therapists in their daily work and patients in achieving their goals – but they cannot completely replace therapists and conventional therapy.

For several decades now, patients with neurological complaints have received support from equipment. Robotics in rehabilitation can be explained as a system that can independently perform movements without the patient having to initiate them. The therapist's control over the specific settings of the movement, such as movement speed or duration of the training, is essential.

In the 1990s, researchers at the Swiss Federal Institute of Technology (ETH) Zurich developed a gait robot. With an "exoskeleton", attached to legs and feet, and a treadmill, paralysed patients could experience gait movements again. The patients are secured to the exoskeleton by therapists and supported with belt suspension.  The number of steps, step speed and movement settings are specified by the therapist or researcher. This system and similar versions are still used today in rehabilitation and are being further developed in research. 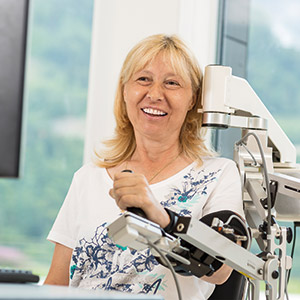 Since then, the field of robotics has experienced rapid growth. There are now different versions of robots in rehabilitation settings around the world for training patients to walk, learning to move their arms again or learning to communicate again after nerve damage to the speech system. The robots support the therapy, but cannot replace the work of the therapists. In physiotherapy and occupational therapy, movement is re-learned, for example, after a stroke, craniocerebral trauma or paraplegia. The consequences of the damage can be so severe that movements such as sitting, standing or walking are no longer possible independently.

The nervous system is adaptive

If certain nerve cells and connections are still present, intensive training can lead to partial or almost complete regaining of independence. Science has repeatedly confirmed the insight that intensity, repetition and early start of rehabilitation are the alpha and omega for the greatest possible recovery and learning of movements [3, 5]. High motivation and support by robots optimise the learning process [4].

Patient motivation is another confirmed factor that plays an essential role in rehabilitation. The use of robotics devices can motivate patients to regain a sense of movement. The recording of certain training parameters such as the number of steps, the effort required for strength or the coordination of movement provides direct feedback. Unfortunately, robotic devices can also deter and create fear. The patient is often fixed with straps and/or cuffs during training. Since the robot executes the movement, large forces act on the patients. If there is an existing fear of the robot, robot-assisted therapy is therefore contraindicated. 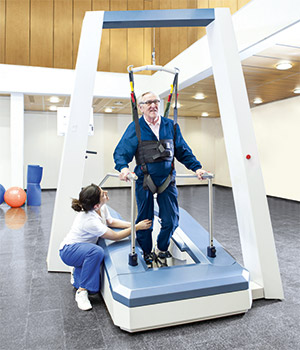 Knowledge of our musculoskeletal system and its control by the nervous system has shown that repeated resistance in movement processes – specifically and systematically applied – can also have a learning effect. Robots therefore "disturb" the movements of the arms or legs of stroke patients in order to trigger a "correction" of the movement. In addition to this supporting factor, robots also contribute to regaining the feeling for and knowledge of our motion system.

It is still important to discuss which complaints or complications require the use of robots, how, when and how often. For example, a combination of robot-assisted training and conventional physiotherapy is recommended for stroke patients. Accelerated work with robot-assisted therapy, on the other hand, is suitable for training gait speed and endurance [3].
In the field of paraplegia (incomplete paralysis) this topic is still being discussed [1, 2]. Here the assumption exists that conventional training on bars (on the ground) is rather advantageous.

The superiority of robot-assisted therapy has neither been proven nor completely rejected. There are no general statements and rules. It is important to understand our musculoskeletal system and how it learns and adapts to limitations and changed situations. This is the only way to consider whether robotics can support patients and therapists during rehabilitation. Research, medicine and therapy are still required here, and motivated patients are needed.

At REHAB Basel we work with patients who suffer various deficits in movement, speech and cognition due to an injury of the nervous system. Many of them can no longer make everyday or relevant movements independently. Robotics supports our therapists in mobilising severely affected patients at an early stage in order to stimulate the damaged structures such as the nerve tissue, stabilise the cardiovascular system and intensively promote learning of movements. In physiotherapy, we currently use three robotics-based devices. These are used for gait rehabilitation and stabilisation of the cardiovascular system. The devices have different support levels, so that different devices can be used for therapy depending on the degree of our patients' complaints. For example, patients on the monitoring ward who require permanent monitoring of the cardiovascular system can be safely vertically positioned and trained with the "Erigo". With the gait robot "lyra" from THERA-Trainer, patients who can otherwise only walk with the support of two therapists can train their walking ability and endurance. Thanks to the gait robot, the patient achieves many more steps than conventional training would allow. Early mobilisation and constant repetition promote the re-learning of movements.

Application of robotics remains a challenge

Simple walking with the therapist is indispensable, however, and supports the learning effect. The research findings are confirmed in practice at REHAB Basel: The use of robotics helps us to mobilise patients earlier and more intensively.

In combination with everyday exercise situations, this type of therapy gives our patients the chance to regain lost skills. The greatest challenge for us therapists is to define which robotics-based device is suitable for each individual patient, and who would benefit more from conventional therapy.

At a glance - Summarised 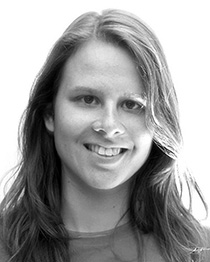 Martina Betschart attained bachelor's and master's degrees in physiotherapy in Switzerland and has been working as a physiotherapist since 2010. In addition, she completed a PhD in Rehabilitation Science at the University of Montreal, Canada, from 2012 to 2016.

Martina Betschart has been head of physiotherapy at REHAB Basel in Switzerland since 2016. She is involved in several projects and pilot studies and has already written publications for various scientific journals, mainly in the field of gait rehabilitation.