Cycling successfully in a team

How can patients be treated optimally in neurological rehabilitation? With conventional or device-based therapy? In individual treatment sessions or better in group settings? Therapists from the Sauerland hospital in Hachen have found that device-based training in the group has positive effects, especially on MS patients.

The hospital's recipe for success lies in the combination of many years of experience and current know-how in a multidisciplinary treatment team. Over the years, doctors, nursing staff and therapists have developed into specialists in the treatment of multiple sclerosis and form an interdisciplinary team.

At the Sauerland hospital in Hachen we treat multiple sclerosis patients in specialised teams of doctors, nursing staff and therapists. The disease symptom spasticity can only be treated optimally and effectively in such a team. It would not be sufficient to treat pronounced spasticity in the legs with medication alone.

One of these therapies from the multidisciplinary treatment concept is medico-mechanical training in a group, also known as cycling. Since December 2017 we have been using the cycling equipment in combination with new THERA-Trainer software. Evidence-based, exact training control and playful motivation are just a few of the key words and reasons why therapists and patients alike enjoy working with it.

The therapy is structured in such a way that four patients practice simultaneously on movement exercisers connected to a computer. The devices can be used as arm or leg trainers and the level of difficulty can be individually adapted to each patient, so that even severely affected patients are able to participate in the training. You can also train in competition mode against each other or as a team.

„Fun games where you forget the time.“ 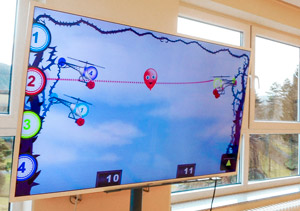 As therapists, we can choose from three different biofeedback games in the software. You can also work with different settings for the severity levels. The "Helicopter" game, for example, goes above and beyond. The aim is to move the helicopter up or down by changing the rotational speed in order to keep a floating balloon in the air. 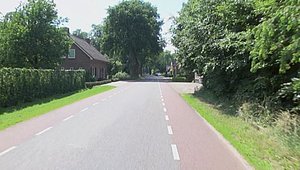 On a bicycle tour through the hilly Sauerland, patients have to pedal purposefully, evenly, rhythmically but also quickly. Patients can explore the most beautiful corners of Holland together. The computer calculates the average speed at which the video route is played.

Particularly positive aspects of the training for those affected include having fun and working together with others, which also encourages social contacts. Through this unconscious training, patients often achieve a higher number of repetitions than when they sit alone at a seat bicycle and mindlessly pedal. The games can be designed to be fair thanks to the individual adjustment possibilities and the patients are often positively surprised by what they were able to achieve while their focus was on something else. This often comes to light in particular after 20 minutes at the end of the group training when the patients can see their own evaluation. This also often motivates them to become more even, faster or stronger in the next session and to get further.

Not for fit patients only

The games are not only easy to understand for fit patients, but also for people with cognitive deficits. In addition to promoting cognition, motivation and coordination, they also promote various muscle groups. The tasks can be performed in both forward and backward motion.

By training as a group, we can achieve high patient coverage in the therapy session. This makes it particularly attractive for us as a clinic. Due to the simple operation of the hardware and software, the workload for the therapist running the session is manageable.

A survey of a patient selection showed that cycling leads to more motivation due to the high fun factor. Many patients reported an improvement in pain, spasticity and range of motion over time. In the evaluations one could often see an increase of the driven distance and an improvement of the symmetry. Regular use has become very important for our patients.

All in all, cycling at our hospital is a therapy that no one wants to do without anymore.

Lara Baum and Melanie Schmitten are physiotherapists. Since 2016 and 2007, respectively, they have been employed at the Sauerland hospital in Hachen with a focus on multiple sclerosis treatment. They work together in a team of 30 physiotherapists, occupational therapists, medical pool attendants, masseurs and speech therapists. In addition to Bobath, PNF and Vojta treatments, they also carry out robot-assisted training and therapeutic climbing. In recent years, they have specialised in neurological forms of therapy through various further training courses.